IN just one sentence, referring to ‘Why?’ by Jadakiss, the Source Magazine identified the failings of the eventually unsuccessful Democratic challenge to George Bush’s presidency in the 2004 US election.

With Britain currently going through the motions of another general election I find myself asking why does a hip hop show raise more questions than weeks of campaigning and TV debates or non debates by the various party leaders.

In the past week I’ve interviewed David Cameron, Nick Clegg and a member of Labour’s shadow cabinet and attended various events. But the most politically charged atmosphere was at Clwb Ifor Bach as Akala, one of Britain’s hardest working and most independent of independent rappers, took the stage when his Knowledge is Power tour hit Cardiff on Friday, April 24.

Throughout the hour and 10 minute performance Akala spat out topics that are barely, or usually not at all, discussed in the general election: the power of the monarchy, Britain’s colonial legacy, racism and the strain and the pain of just paying bills.

“Absolute power corrupts absolutely/But absolute powerlessness does the same,” cried Akala: “It’s not the poverty/It’s the inequality that we live with everyday that will turn us insane’. The conflict and contradiction at the heart of Britain’s class war eloquently expressed in a single hook on the topic that really can’t be discussed.

Sometimes though Akala is just as frustrated as everyone else, as expressed in ‘Don’t Piss Me Off’. His anger is always well channeled and the show lively and funky as hell (XXL) with the lyricist backed throughout by a live drummer – but no DJ.

For all the political content, the show is never anything less than hype – and that general election isn’t referred to directly or indirectly once.

Akala also came with a sense of humour and suggested anyone who’d illegally downloaded his music might like to buy a CD at the back of the room. He also brought his usual touring partner, alter ego Pompous Peterson. 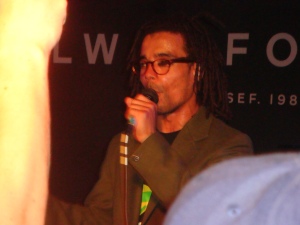 Clwb, often referred to as ‘the Welsh Club’ has established itself as one of Britain’s best small live music venues. It was originally opened 30 years ago as a social space to support the Welsh language, an aim it remains committed to today.

Uncle Pompous, sporting glasses, a tweed jacket and cut glass upper class accent, however took to the stage to call the audience ‘Welsh scum’ who ‘piss me off with your own language and nation’.

Though a fixture of every gig Pompous never stays on stage too long and Akala soon returned to finish his set which included a good mix of songs from his new album ‘Knowledge is Power Volume 2’ and older material. Some personal favourites were missing but that was bound to be the case from an artist who has steadily built a large back catalogue.

Towards the end of his set Akala appealed for silence to read from his ‘Ruins of Empires’ graphic novel and long form poem. It was the only point in the night where the tempo and energy levels on stage and in the crowd dropped, but the intensity increased.

The show closed when support act Mic Righteous joined Akala, the two MCs showed while they can raise political issues they could also hold the MIC and a crowd.

Earlier Righteous ripped through a twenty minute set with as much passion as the headliner. The highlight of the support slot was ‘Sack City’ a diss track aimed at former Radio One DJ Tim Westwood which you’ll never hear on the radio.

The only disappointment, especially for a Friday night, was how early the show started. I was waiting for my first drink when Righteous arrived on stage at 9pm and Akala followed him just half an hour later. In fairness this is also a frustration for the artists and beyond their control

I don’t think I was the only one taken by surprise either as Clwb was apparently close to sold out but not quite half full as Akala’s show began.

The early start also meant I missed local support artists Jugga Note and Turna Phrase but Rockpie Promotions deserve credit for bringing Akala back to Cardiff and in a bigger venue than the Moon Club where they hosted him on his Thieves Banquet tour in December 2013.