IF you’re going to name your tour Legends of Reggae it’s only fair they should perform in venues suitable for the billing.

Cardiff’s best small venues have played host to some legendary reggae figures, especially in recent years, but a line up featuring Max Romeo, Eek A Mouse and Big Youth (not to mention the Mighty Diamonds whose appearance was cancelled at the last-minute) deserves a bigger stage.

Fortunately Cardiff justified the move to the 1,000 capacity Tramshed. Though the Friday, May 3 show hadn’t sold off the large hall was close to full way before the city’s number one reggae sound, Love & Harmony, had finished the warm up. All that was needed was for their Radio Cardiff colleague Scorpion to introduce the performers, usually with some biographical titbits such as opener Big Youth trained as a diesel mechanic.

The 70-year-old Big Youth, flashing a mouth full of gold with as just much around his chest, was perhaps unlikely to get the crowd singing along early into his set with Every N***** Is A Star. He worked in part of Marvin Gaye’s Mercy Mercy Me as his languid style eased the audience into the night.

After 40 minutes Big Youth (right) made way for Eek a Mouse who entered the stage dressed as Zorro complete with cape and mask. Over 50 minutes, which included a late costume change to a golden robe and turban, the Mouse ran through a series of hits and gave the audience plenty of chances to join in with so many of his memorable sayings and chants.

Eek A Mouse as Zorro

and after his costume change

Personally I could take or leave the first two acts and with the late cancellation of the Mighty Diamonds, reportedly due to visa issues, I was underwhelmed. But just under two hours since the always tight Mafia & Fluxy Band opened the live show Max Romeo took control of the evening.

The 74-year-old veteran vocalist gave a masterclass in performance even if, other than gently shuffling on the spot, he rarely moved from the centre of the stage.

He was also accompanied by two female backing singers. Throwing high-pitched voices and verbal gimmicks, unlike the two earlier acts, is in no way part of Romeo’s repertoire.

He opened his hour-long performance with songs devoted to the Rastafari faith, One Step Forward, Selassie I Forever and Melt Away before addressing the crowd: “Thank you. Been a long time since I been to Cardiff, long time. You’re still there and I’m still here.”

The politically charged singer then dropped the poignant Uptown Babies. “Uptown babies don’t cry/They don’t know what hungry is like/Uptown babies don’t cry/They don’t know what suffering is like/They have mummies and daddies”. The beautiful clarity of Romeo’s voice and delivery contrasting with his question and statement: “Hear that little baby crying?…She’s crying because she’s hungry…Poverty is a sin.”

As he began War Ina Babylon the singer, whose dreads reach past the back of his knees, paused at “baba men” and “po-lice men no like the dreadlocks man” for Mafia & Fluxy to rewind and start again. You can sense Romeo, whose lyrics contain many Biblical references, is sincere in the truth of what he is singing and he invites the crowd to join in with a rendition of Give Peace A Chance at the end of his hit before unleashing the mighty Chase The Devil as he sings of donning an iron shirt to chase the “evilous man out of earth”. 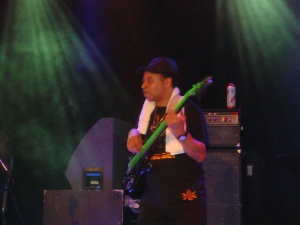 Romeo temporarily leaves the stage before returning for an encore of Public Enemy Number One and what started as an unaccompanied performance of Bob Marley’s Redemption Song before the entire repurposed tram shed joined in. Romeo could have walked off stage on a wave of emotion from the crowd at that moment but closed the show with another song laced with Biblical imagery, Valley of Jehoshaphat. Perhaps it’s no surprise the 55-year reggae veteran didn’t perform his groundbreaking hit Wet Dream.