TELL anyone you’re a journalist and they’ll soon ask about famous people you’ve met or interviewed. While there are usually a few names you can reel off it’s more than simply a cliché to say the most satisfying aspect of the job is meeting everyday people with extraordinary stories. Embed from Getty Images

That’s not to say however that hacks aren’t excited about the sort of close encounters with the rich and famous that can come your way in the job. Nearly three years ago I was lucky enough to interview Tony Benn, the veteran left-wing campaigner and former MP, who died last Friday, March 14 aged 88. That interview is re-produced at the bottom of this post. END_OF_DOCUMENT_TOKEN_TO_BE_REPLACED

Klashnekoff on stage at the Moon Club, Cardiff on Weds, March 12

The crowd. Nothing wrong with those that were there, it’s just they probably numbered less than 100. The Moon Club was far from anywhere near full and felt a little flat – more like a crescent moon just not awe inspiring. END_OF_DOCUMENT_TOKEN_TO_BE_REPLACED

A stencil of Biggie sprayed on a telephone exchange in Cathays, Cardiff, Wales UK

FIVE* years since The Notorious BIG was shot dead in Los Angeles and his giant frame still looms large on hip hop.

Just as Canibus referred to the Big Poppa during his 1998 lyrical beef with LL Cool J, today New York is buzzing as Nas and Jay Z do battle – and both state their relationship to, and respect for, Biggie.

Nas scoffs at Jigga’s assertion that he is now the king of New York. But if it wasn’t for Biggie it would be a crown that had long since lost its shine. END_OF_DOCUMENT_TOKEN_TO_BE_REPLACED

LIVE reggae shows have been few and far between in Cardiff lately but just like the buses you wait ages for one, and then two influential Jamaican artists come along at once. 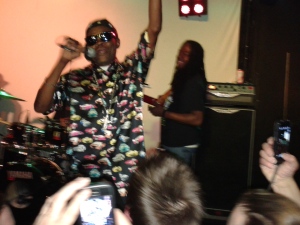 Yellowman and Dillinger opened the second night of their UK tour at the Globe, in Albany Road, Roath on Thursday, February 27 and were greeted by what looked like a crowd not far short of its 350 capacity, even with tickets still available on the door. END_OF_DOCUMENT_TOKEN_TO_BE_REPLACED